I stayed in Germany for one year and during this year - what I will never forget and I was so happy to witness - is the weather transitions from one season to another. It was so magical how the changes were happening, because sometimes I didn’t even see it coming; I have been always amazed by how countries differ when it comes to climate. 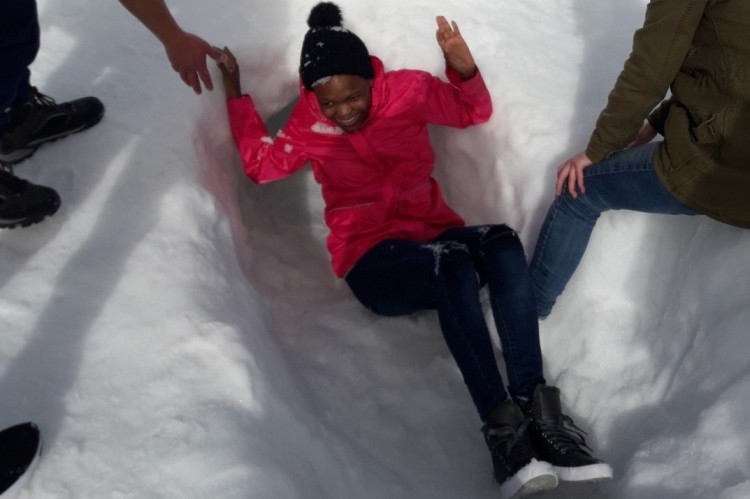 I stayed in Germany for one year and during this year - what I will never forget and I was so happy to witness - is the weather transitions from one season to another. It was so magical how the changes were happening, because sometimes I didn’t even see it coming; I have been always amazed by how countries differ when it comes to climate.

We arrived by the end of summer 2016, and I had only ideas of how winter is that I got from people’s stories about Europe. What I knew were only the names of the seasons summer, autumn, winter and spring which I learned at Goethe Institut but also from the English novels that I read in my lifetime.

After we arrived, it was so cold to me even though it was summer, but most of the times I was in my thick jackets that I brought with me from Tanzania, and people would always say to me “Agness this is summer, it is not even cold and you are freezing” I remember also being given the “hot water bottle” by my host mother and she would always tell me “Agness, normally we do not use this in the warm seasons”. One day I was in the car with my host sister and she was showing me the sun, it was late in the evening and I was concentrating on the music in the car not paying attention to what she was saying at all and later on she said “Agness appreciate the sun now! Please, you will miss it one day”. By then I was even bored by people’s stories about the weather every day. This was the main topic and I didn’t understand why. Then to my surprise I started noticing the day becoming short and it was dark for so long, I couldn’t understand why it was like that and I had to ask and I was told now the summer season came to an end and it was fall season. 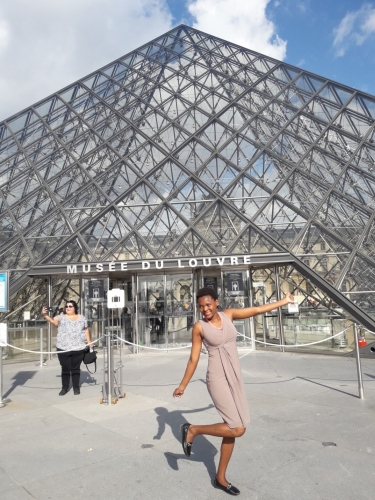 Enjoying the Summer Sun at the Louvre Museum in Paris

The beauty of autumn was the changing colors of tree leaves: I was taking photos of the nature every day on my way to and back from work, they were so astonishing I would see the combination of colors like pink, yellow orange and green on the trees just like a rainbow, but the coldness disturbed me a lot. During this season, I felt sick with cold and flu several times and I had to stay inside.

Then winter came and it was deadly cold to me. I started understanding the meaning of the hot water bottle. I couldn’t stand anything, the cold was striking too hard, I put on a lot of clothes, but still it was cold, I would walk a way which has trees with no leaves and it was dark even during the day and I remembered my host sister’s statement that I should appreciate the sun, because there were weeks with no sun at all. I also became a part of the conversation I used to find boring: the “weather topic”. I was discussing about it every day and every morning I would check the weather app on my phone to see how the day was going to be. What I will miss about winter is snow. It was so beautiful to see the tree branches covered with snow and another thing is the Christmas season, because it was like a fairy tale to me with all those Christmas markets and the hot wine, it was so cozy.

Spring was my favorite season because of nature. I love being around a lively environment and during winter it felt to me like everything else died, only we human beings continued to exist. So during spring, I was happy to go outside and see the green plants coming out again, all the flowers and grasses, it was a wonderful season to me. The fact that I reduced the number of clothes to put on was a relief as well, because I was too tired of spending more minutes to overdress myself for the cold.

After a while it was summer again and the voluntary year was almost over, but I enjoyed every minute of the summer sun, even though sometimes it was cold but not as during winter. Also, it was raining a lot of times, but still it was better than the coldest seasons. And after this year and all the seasonal changes, I am so happy that I survived the WINTER, with all the bad feelings I had towards it, but I survived and I went sleighing, I played with snow, I feel like a champion.